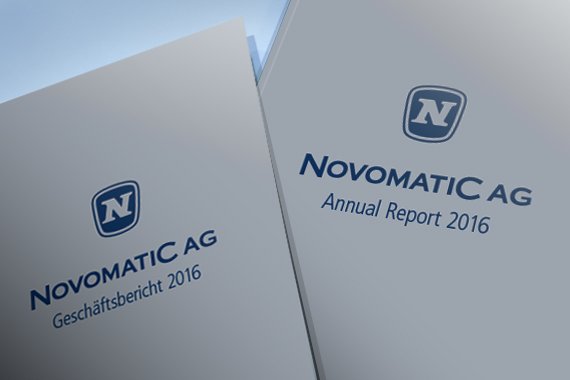 Gumpoldskirchen, April 7, 2017 (OTS) – NOVOMATIC AG, one of the world’s leading gaming technology companies, saw its global headcount rise to over 23,500 and revenues increase by 10 percent to an all-time high of around EUR 2.3 billion in 2016.

According to the company’s annual financial report, published today on the ÖKB (Österreichische Kontrollbank) website, the NOVOMATIC AG Group achieved the highest revenues in its 36-year history. Revenue in the past financial year 2016 reached EUR 2,294.1 million, corresponding to a year-on-year increase of 10 percent. The largest increase was achieved in the area of gaming machine revenues, which rose by EUR 126.7 million to EUR 1,028.9 million. Group EBITDA came to EUR 588.5 million (2015: EUR 616.7 million). During the year under review, the number of employees in the NOVOMATIC Group grew by 18.1 percent to a total of 23,849. The growth dynamics of the NOVOMATIC AG Group is also demonstrated by the fact that the number of fully consolidated companies in the financial year 2016 increased to 217 (2015: 188).

“Not only did we achieve excellent financial results in 2016, but we also set out clear strategic paths that are particularly important for the further expansion of the Group of companies. These include the signing of an agreement to acquire approximately 53 percent of the shares in the publicly traded Australian company Ainsworth Game Technology Ltd. Thanks to the strong presence of Ainsworth in Australia, Asia, North and South America, NOVOMATIC will, in future, also intensify its work in these markets,” said Harald Neumann, Chief Executive Officer of NOVOMATIC AG, reporting on the development of the Group.

The focus of the NOVOMATIC Group also continued to be on further expanding its business activities in Europe. To this end, a strong signal was sent in the important British market with the acquisition of Talarius Ltd. by NOVOMATIC UK. NOVOMATIC also expanded its market position in Germany, Italy and Spain by acquiring numerous smaller companies. In Austria, the acquisition of shares in Casinos Austria AG and Österreichische Lotterien GmbH was the focus of attention, along with the associated decision by the Cartel Court. The legal steps resulting from the acquisition of 17.19 percent of the shares will now be completed in the forthcoming reporting year of 2017.

In order to harness growth opportunities, NOVOMATIC also expanded its financial scope for action in the previous year, issuing a benchmark bond in September 2016 with a volume of EUR 500 million, the first such bond from an Austrian company in 2016.

The combined Group revenue of the NOVOMATIC AG Group, as well as the two Swiss sister holding companies ACE Casino Holding AG and Gryphon Invest AG, also reached a new high in 2016 at EUR 4,402 million (2015: EUR 3,929 million). Together, the companies in question employ around 29,000 employees worldwide, of which approximately 3,300 are located in Austria.

The NOVOMATIC Group is one of the biggest international producers and operators of gaming technologies and employs around 29,000 staff worldwide. Founded by entrepreneur Professor Johann F. Graf in 1980, the Group has locations in more than 50 countries and exports high-tech electronic gaming equipment and solutions to 80 countries. The Group operates more than 260,000 gaming terminals in its some 1,800 plus gaming operations as well as via rental concepts.

Through its numerous international subsidiaries, the NOVOMATIC Group is fully active in all segments of the gaming industry and thus offers a diversified Omni-channel product portfolio to its partners and clients around the world. This product range includes land based gaming products and services, management systems and cash management, online/mobile and social gaming solutions as well as lottery and sports betting solutions together with a range of sophisticated ancillary products and Services.